Drive on Black Ice: Tips for everyone

Black ice can happen so quickly to the roads, by the time you realize it can be too late. But what is it exactly? Black ice, sometimes called clear ice, is a thin coating of glaze ice on a surface, especially on roads. The ice itself is not black, but visually transparent, allowing the often black road below to be seen through it.  Driving on black ice doesn’t take skill, it takes common sense. Black ice can be so dangerous because it forms when it’s raining and the air is at or below 32 degrees Fahrenheit at the surface, according to AccuWeather Senior Meteorologist Andrew Mussoline. The ground temperature causes the precipitation to freeze upon impact, thus creating ice. Sleet and the refreezing of snow or water can also generate black ice.  Here are some great tips from wikihow.com on navigating the icy roads.

Know where to expect black ice.

Black ice usually forms just about the freezing point. Sometimes in frigid weather conditions on highways, black ice will form due to the heat of tires on the road coupled with the freezing temperature. Keep an eye on the weather and highway reports.

Know when to expect black ice.

Black ice tends to form in the early morning and evening. During the daylight hours, the road is usually warmer and less likely to create black ice. But remember: less likely does not mean “never”. Always be prepared for the possibility of encountering black ice. 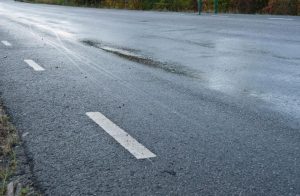 While black ice is transparent, it can sometimes be seen in the right lighting conditions – if you are looking for it. Black ice almost always forms in very smooth, very glossy sheets. This glossy surface is your indication of potential black ice. If the majority of the road you’re driving on appears a dull black color, but the patch just ahead of you appears shiny, you may be about to drive onto the black ice – don’t panic, follow the instructions below.

Deal with a black ice encounter.

If you do hit black ice, your first reaction must be to remain calm and avoid overreacting. The general rule is to do as little as possible and allow the car to pass over the ice. Do not hit the brakes, and try to keep the steering wheel straight. If you feel the back end of your car sliding left or right, make a very gentle turn of the steering wheel in the same direction. If you try to struggle against it by steering in the opposite direction, you risk skidding or spinning out.

At Farquhar and Black we want to make sure you are driving safe this winter season.  Call us today to make sure you have the right coverage on your auto policy.  If you are new to this area and need coverage click on this link for an auto quote.  We would love to help you with all your insurance needs!  car insurance quotes

Are you ready to save time, aggravation, and money? The team at Farquhar & Black Insurance is here and ready to make the process as painless as possible. We look forward to meeting you!