There is nothing more exciting and yet also scary in a parents life then when their child is finally old enough to drive.  You want to be supportive of this new chapter in their life but also you need to set some serious rules and guidelines before they take the car.  Having a checklist that you go over before you child goes out can give you a piece of mind. 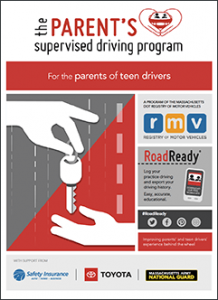 Safety Insurance as well the RMV have paired up with Toyota to make a guide and checklist for parents with teen drivers.  This guide is to help parents teach their children about the important safety factors that when they driving in all different types of weather, city driving, rural driving, and what it means to be a distracted driver.

Motor vehicle crashes are the leading cause of teen deaths.  Roadway safety in Massachusetts is driven by the behavior of each individual driver.  Your commitment as a parent to assist your child in maximizing this learning experience is commendable.

As a parents you should encourage as much supervised time behind the wheel as possible.  This will allow your child to feel comfortable and not timid behind the wheel.  The state requires a minuim of 40 supervised hours, but there is nothing wrong with more!  Here is the check list provided by Safety Insurance for parents to go over with there child:

Make an effort to enjoy the learning process:

Driving is a big step toward independence, and your teen is entering a new phase of life. You’ll both remember this experience for years to come. Make it a good memory!

Studies show that the risk of a crash diminishes with experience. The more time you can spend driving with your teen, the less likely it is they’ll crash when they begin driving alone. Driving in a variety of circumstances is equally important. While using this program, you should drive on all types of roads. Make sure your teen gets exposure to a variety of roadways, and in different conditions as well: at night; in rain, fog, and snow; and in heavy and light traffic.

Be a driving role model:

It’s not enough to say, “Do as I say.” Children imitate their parents’/guardians’ behavior, so your driving should set a good example for your teen to emulate. Be sure that you:
• Obey all traffic laws.

• Refrain from using your cell phone while driving.

• Always wear your seat belt, and remind your teen that buckling up is the law. This will need to be an ongoing conversation — buckle up every trip, every time.

Tips for teaching your teen

Driving under the influence

A big part in taking the next step to having your child drive is having that conversation to them about drinking and driving.  We know that the legal age to drink in the United States is 21 but sadly some of our kids tend to break this law.  We as parents need to have serious conversation with them about the dangers that come with getting behind the wheel when you have been under the influence of any substance.  Safety Insurance has once again provided a checklist to go over these circumstances with our children:

Kids observe and learn from their parents. Put your phone away while driving and only use it when you are safely pulled over.  According to the Pew Research Center, 40 percent of teens, aged 12 to 17 say they have been in a car when the driver used a cell phone in a way that put themselves and others in danger.

Talk to your teen

Discuss the risks and responsibilities of driving and the danger of dividing their attention between a phone and the road. Show them the statistics related to distracted driving and urge them to share what they learn with their friends. Encourage them to speak up if they are a passenger in a car with a distracted driver.

Set up family rules about not using the phone or other electronic devices while behind the wheel. Enforce the limits set by the graduated driver licensing program (GDL).

Have your teen take action by agreeing to a family contract about wearing safety belts, not speeding, avoiding all drugs and alcohol if you know you have to drive, and not using a cell phone behind the wheel. Agree on penalties for violating the pledge, such as paying for tickets or loss of driving privileges. 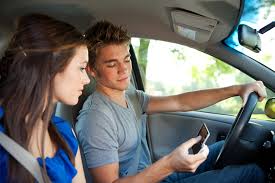 In addition to cell phone use, distracted driving can include eating, grooming, drinking, listening to or adjusting the radio, using the GPS, talking to passengers, or watching a video, just to name a few activities.  Inexperienced drivers are particularly susceptible to these kinds of distractions. Wearing both earbuds while driving is also dangerous, as well as illegal. Earbuds can distract a driver and diminish their ability to hear emergency vehicles and other audio safety signals. One earbud is allowed, but not both.

Laws for operating under the in uence of alcohol also apply to drugs. Almost any drug can affect your driving skills. Illegal drugs, prescription medicines, and over-the-counter medicines can all make it dangerous to drive. Smoking or consuming marijuana makes it more dif cult to respond to sights and sounds. This makes you dangerous as a driver because it lowers your ability to handle a quick series of tasks. The most serious problems occur when facing an unexpected event, such as a car coming from a side street or a child running out from between parked cars. These problems get worse after dark, because marijuana also causes decreased visibility at night.

• It is illegal to use marijuana under the age of 21.
• Marijuana can negatively impact your ability to safely control a vehicle.
• Marijuana will slow your reaction time and impair your judgment.
• Marijuana effects your coordination, your memory, and ability to problem-solve.
• Combining marijuana and alcohol, even in small doses, greatly increases the risk of getting into a crash.

Kids need to remember that we are all cheering for them.  We are essentially their biggest cheerleaders.  They may roll their eyes when you talk to them, tell you that they already know all this, its a waste of time.  Stand your ground and keep telling them!  The more they listen, the more they know, and then they will become safe and cautious drivers!  And really thats what we all want!

Are you ready to save time, aggravation, and money? The team at Farquhar & Black Insurance is here and ready to make the process as painless as possible. We look forward to meeting you!